Back in 2007, Eskom began an Environmentam fcl Impact Assessment (EIA) for building a large new nuclear power plant on the Koeberg site, about 28km north of Cape Town. Ten years later, after many drafts and submissions, the Department of Environmental Affairs issued an Environmental Authorisation for the project to go ahead. Many organisations appealed this decision, and Eskom was required to respond in detail to the content of each of those appeals, which they have now done (in August 2018).

Many of these responses were combined into one document, which has been widely distributed. However, KAA received the following 115 page specific response. There has not been time to go through it in detail yet, but it is published below to give you all the opportunity to have a look through it and pass it on to others.

Paging through it, a few bits stood out for me.

A tourism plus…
In a show of optimism regarding possible impacts of tourism, Eskom writes “Some nuclear power stations have a positive effect on tourism, as tourists visit specifically to see the stations.”

END_OF_DOCUMENT_TOKEN_TO_BE_REPLACED

After a long Environmental Impact Assessment which began in 2007, an Environmental Authorisation was issued for the Koeberg site, 26km north of Cape Town.  This gave Eskom permission to build a new nuclear plant of unspecified design, plus a nuclear waste reprocessing and/or disposal site.

At first only 30 days were allowed for appeals against this decision, and this was extended on the day of the deadline to about 90 days, until 5th March 2017. There are so many reasons this Authorisation was wrong, and we tried to describe some of them in the 43 page submission we wrote. END_OF_DOCUMENT_TOKEN_TO_BE_REPLACED

Intelligent people often hold a range of views on complex issues, especially where more than one criterion is involved, and where some criteria may not be easily quantified.

Newspaper editorials have criticized the Government’s abuse of secrecy – what democracy classifies its future electricity plans as secret? – as it proceeds with its programme to build six to nine extra atomic power reactors totalling 9600 MW of electricity. The reason for secrecy is defensive: these plans cannot stand up to scrutiny for economic rationality.
END_OF_DOCUMENT_TOKEN_TO_BE_REPLACED

There has been a lot of press recently about the ‘nuclear deal’ with Russia.

It all started when our brand new Minister of Energy, Ms Tina Joemat-Pettersson, came back from a United Nations hosted International Atomic Energy Agency (IAEA) meeting in September.  Among her papers was a press release, which was issued on 22 September 2014, and publicised for example here.

There is a deal…
However, the newspapers provided very little, if any, actual information.  Some bits were quotes from old speeches by the Minister or statements from the Department of Energy, and it spoke of ‘laying a foundation’, which clearly was not a purchase order.  Despite that, it was headlined as a ‘deal’, and mixed in with figures about the total cost of a fleet of nuclear reactors.

There is no deal…
There followed a week of flurry in the press, with a retraction from the Department being released almost immediately, and continued furious backtracking with articles appearing like No nuke reactor deal with Russia and SA signed several nuclear agreements.

Theories…
So what happened?  One theory is that our President has signed a secret deal with Putin and perhaps others in Russia to commit to buying nuclear reactors from them.  This would be tricky to implement, since it would so clearly bypass any bidding process and the Public Finance Management Act.  However, there are worrying factors, such as the Secrecy bill, President Zuma assuming control of the inter-ministerial committee formed to implement the nuclear roll out, Russia being free of EU anti-corruption laws, nuclear being carefully excluded from the 2011 new generation build regulations, and increasing control over the judiciary by the executive.

Another theory is that this was the product of the public relations people hired by the nuclear industry.  They would have been swarming all over the recent IAEA conference in Vienna, and our freshly appointed energy minister would have been easy prey.

These PR professionals would have generously offered to assist with the wording of an agreement, and even with writing the associated press release.  They were perhaps surprised by the lack of resistance or any analysis by Joemat-Pettersson, and no doubt pleased with themselves and the positive press they had manufactured, especially by wedging the word ‘deal’ into things.

Column inches…
Someone more informed than Joemat-Pettersson saw the press release, and understood any such deal would be illegal and invalid.  There followed some intense damage control, and the deal became an agreement.  There were also apparently many such agreements planned with other countries.

The job satisfaction of the PR team must have also been short lived, as the backlash resulted in articles about the ever increasing costs of nuclear power and other negative aspects.

Fusion will be here in 15 years?
There is another IAEA conference coming up in October 2014, this time about fusion, hosted by Rosatom in Russia.  The PR machine will again be out in force, and no doubt there will be press releases appearing around the 18th October.  Hopefully they will come up with something more than ‘fusion will be in use in about 15 years’ – which has been the case since 1956.

Policies and plans…
In South Africa, decisions are made in the context of various govermental documents.  First there is the nuclear policy, adopted by the ANC in 2008, which is pro-nuclear.  Then there are two energy plans, the Integrated Energy Plan (IEP), and the Integrated Resource Plan (IRP) which deals with electricity specifically.  There is also the National Development Plan (NDP), a vision for South Africa from some of the most respected thinkers in SA.  At a lower level, there is the Nuclear-1 Environmental Impact Assesment and also a National Nuclear regulator licensing process, both of which must be passed before any order for nuclear reactors can be finalised.

Wait, don’t do it, wait…
The IEP recommends that a decision on nuclear is delayed for a few years to see what happens to relative energy costs, specifically from renewable sources.

The IRP states that should nuclear power capital costs exceed $6500 per kWh, the nuclear option should be abandoned.  However, the Rand has fallen to around R11.30 to the dollar, so this figure should be adjusted to around $5800. [Subsequently to publishing this, the rand has fallen below R15.50 to the dollar, which means the figure should now be  about $4150.] The most recent nuclear build in the United Kingdom came in at $8000 per kWh, and that is before any future cost overruns. This means the IRP clearly recommends that nuclear power be abandoned.

Finally, the NDP came out strongly against going ahead with nuclear power, calling for a national debate on the issue before any decision is made.

Nay, nay, nay… the yay’s have it!
Despite these three ‘no’ votes, the executive seems to be steaming ahead. Possibly its because they are working off outdated documents – the IRP 2010 and the Nuclear Policy of 2008 are about five years old, included overestimates of electricity demand, and pre-date recent advances in renewable energy, as well as the Fukushima nuclear disaster.

Hopefully, when the updated IRP is released the Department of Energy will align itself to that and formally abandon the nuclear path.

And hopefully, there won’t be a cheap Russian solution which omits some of the more expensive safety features and comes in under $5800/kWh.

When the Department of Energy called for bids to supply renewable energy to the South African grid, they produced a bid document which described the conditions and information required from bidders.  This was only available to prospective bidders who paid a fee of R15 000, and signed a confidentiality agreement which included the stipulation to “not divulge or distribute any information in respect of this RFP or pass on any copies of this RFP”. 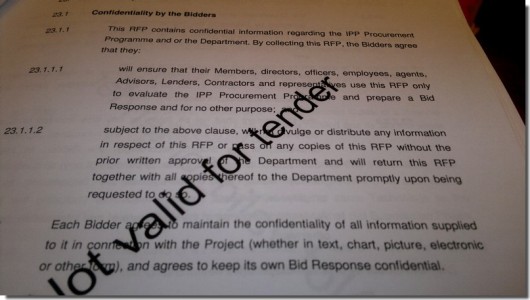 END_OF_DOCUMENT_TOKEN_TO_BE_REPLACED

The Heinrich Boell Foundation arranged a set of presentations and panel discussion on the theme of ‘Beyond coal and nuclear’.  The three highly distinguished presenters were Kimiko Hirata of the Japanese organisation Kiko network which has its goal the prevention of dangerous climate change; Arne Jungjohann of the Washington office of the Heinrich Boell Foundation (HBF); and Michaele Schreyer, member of the supervisory board of HBF. END_OF_DOCUMENT_TOKEN_TO_BE_REPLACED

Germany has been in the news recently for announcing that it has scrapped all plans for using nuclear power in the future. The magnitude of the nuclear disaster in Fukushima and the radioactive contamination there resulted in German voters making it very clear that any party supporting nuclear expansion would be in trouble in the polls. For the first time in history, the German Green Party won a regional election. 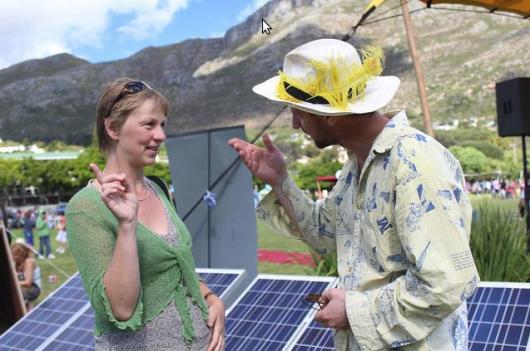 But what about the 26 new coal power stations that Germany is planning to build as a result of abandoning nuclear power? END_OF_DOCUMENT_TOKEN_TO_BE_REPLACED