Its is well known that exposure to radiation increases your chance of getting cancer.  But scientists are still debating whether or not this applies at very small doses. We are exposed to natural radiation, to radiation from medical procedures, and there is also a significant amount of detectable radiation all over the earth from atomic bomb tests (which were mostly in the Northern hemisphere).  Nuclear power stations also routinely release radiation via various mechanisms (e.g. releases of tritiated steam and condensate).  At Koeberg, this has resulted in radiation levels in groundwater more than 10 times higher than normal [Progress Report # 26 – February 2010 Monitoring Run].

The question is: do we want to add to the levels of radiation we receive by building more reactors, or should we be cautious until we know for sure?

Research seems to indicate [New England Journal of Medicine] that exposure to multiple risk factors resulted in a very significant increase in leukaemia in children.  Do we want to add exposure to this low level of radiation released from nuclear power stations to the risk factors our children are exposed to?

The following published research papers also seem to indicate that there may be a link between cancer and nuclear power stations: 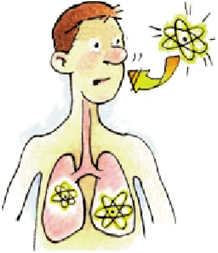