Germany has been in the news recently for announcing that it has scrapped all plans for using nuclear power in the future. The magnitude of the nuclear disaster in Fukushima and the radioactive contamination there resulted in German voters making it very clear that any party supporting nuclear expansion would be in trouble in the polls. For the first time in history, the German Green Party won a regional election.

But what about the 26 new coal power stations that Germany is planning to build as a result of abandoning nuclear power? “Nonsense”, says Sabine Goeddenhenrich, chair of the Green Party in Aachen, Germany. Those 26 coal power stations were planned well before the Fukushima accident happened, and may not actually be built.

“I hope that we can learn from the experiences of Germany ” said Becker, who believes that Cape Town and South Africa as a whole can fast track progress towards a sustainable energy future, by avoiding the problems that have caused delays elsewhere. 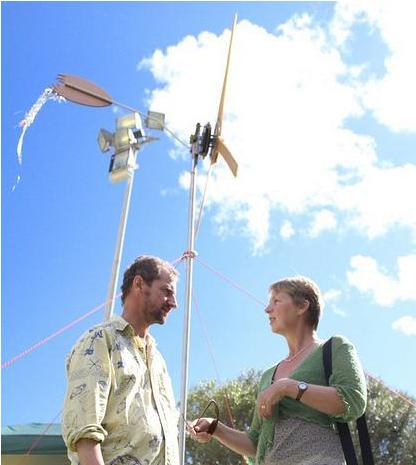 South Africa is on the brink of ordering 6 new nuclear reactors, to be installed at three sites along the Coast. “Nuclear power plants take a long time to build”, says Becker.  “Fifteen years is a reasonable estimate from start to finish, and that is a long time to wait.  “In contrast, a small scale distributed systems can be installed very rapidly, and so start generating electricity within weeks.  The City of Aachen has shown how the regulatory framework needs to be set up in order to facilitate this process”.  The problem of what to do with long term nuclear waste has stil not been solved in Germany, according to Goeddenhenrich.

It has been estimated that the decision to go nuclear will cost South Africa about R1trillion.  “Once the inevitable cost overruns occur, it is not impossible this will rise to R10 trillion” says Becker.  “That is enough to build a house for every man woman and child in South Africa, every one with a full set of solar PV panels, batteries and the required electronics, and still have a few trillion rand change.”  Becker also believes that leaving nuclear waste as a problem for future generations to solve is ethically questionable.

Aachen has also installed its own wind turbines.  “The key, ” says Goeddenhenrich, is that the wind turbines are owned by the City, and not a centralised energy company.”

“Hopefully we can learn from the experiences in Germany, and put a regulatory framework in place which will allow the use of current renewable energy technology.  This is by far the quickest and also the cheapest way to reduce South Africa’s reliance on coal power”, says Becker.