Eskom and the Department of Energy have recently cranked up efforts to move forward with the plans for more nuclear energy for South Africa.  In the Environmental Impact Assessment being prepared by GIBB consultants, the background to this includes a graph of the predicted peak electricity demand. Here is the graph they use, on page 2 of the latest combined main report, released in September 2015: 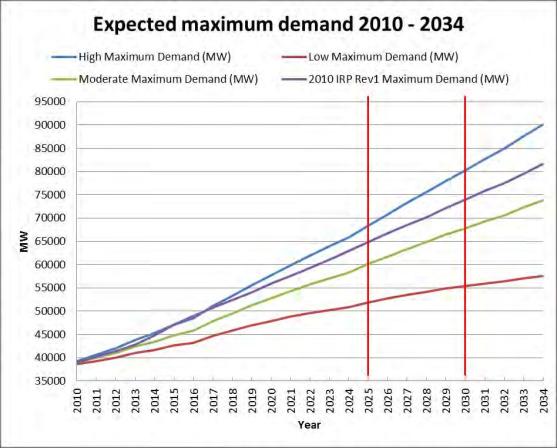 GIBB uses this graph to justify the need for a massive increase in generating capacity by 2030, and hence the need for nuclear power.  This is based on the IRP 2010 report, which in turn was based on government predictions of 5% growth per annum in the South African economy.  As is common knowledge now, this predicted growth failed to materialise.  Now we have actual data, which can be compared to the above.

The GIBB consultants wrote in 2015 that in the ‘moderate’ case, demand would grow “from approximately 39GW in 2010 to about 74GW in 2034”.  GIBB is badly wrong here, and either they know it and are choosing to conceal this, or they are frighteningly misinformed.  If its the former, they may be subject to criminal prosecution and jail sentences.  If its the latter, they are simply incompetent.

Here is the same graph, with the approximate actual maximum demand data added:

The GIBB consultants have a responsibility to put all pertinent information before the decision makers, and so must incorporate this data into their final report.  To knowingly do otherwise would be criminal.

The above was sent to the GIBB consultants, who were given 7 days to comment.  They did not respond to the substance of the above, but replied: “GIBB remains committed to placing all relevant information before the competent authority for their decision making. GIBB further notes your intent to accuse us of criminal intent in executing our role of EAP on the project. We strongly reject your assertion and will refer the matter to our legal counsel for input.”

Note that this is not the first time the GIBB legal department has been used to threaten KAA.  In 2010 GIBB wrote this letter about the video footage used for this post, after the facilitator refused their request to forbid KAA to video the public meeting.

5 responses to “Eskom and GIBB living in la-la land”