In March we hosted a conference questioning whether Africa should look to nuclear power as the solution to our energy requirements. Despite the enormous risks and costs associated with nuclear power, the South African government has stated it is planning to order 6 more nuclear reactors in 2012. On the African continent today, South Africa is the only country to possess a nuclear reactor, and its developments in this field will undoubtedly influence other African countries.

To counter the lobbying by the international nuclear industry that downplays the dangers and costs involved, the conference was organised with three categories of activities: a closed door day for NGO’s and activists, a public day with prominent speakers and guests, and various public side events, with a focus on meaningful engagement. 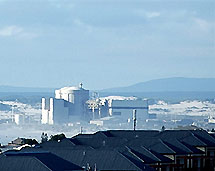 The first day’s objective was to build formal and informal cooperation between anti-nuclear activists in South Africa, Africa and globally, to learn from each others experience and expertise and to explore ways to coordinate efforts and share resources in the future where beneficial.

The main points that emerged were as follows:

A conversation mapping session followed, where the following five questions were written in the center of large pieces of paper, each of which was placed on its own table. The questions with answers as suggestions and conclusions in order of  popular vote follow:

One of the conversational maps

How can we establish and strengthen a network against nuclear power internationally and locally?

How can we best work together when it comes to the EIA?

Who are the important people that could sign the Declaration for a Nuclear Power Free Africa and how can we reach them?

What are the best arguments against nuclear power and how can we best use them in order to influence the decision makers?

The first day closed with a feedback session; the main themes that came back from participants were that:

They were appreciative of having a space to network with like-minded individuals as it is important to share ideas and learn what we can from each other. The coming together and sharing reminds us of our shared commitment and values; there was great emphasis on what moved these people present to join the movement. Another important point touched upon was the need to make communications more effective; in terms of clarity of messages, the accessibility of facts and the need for more spokespeople.

Outcomes of the day:

The objective of this day was to engage with the public, officials and the press on the topic of renewable energy versus nuclear energy. The specific objective of the morning session was to present to the public and press issues relating to nuclear power station emergency preparedness, drawing on first hand experiences at Chernobyl and Fukushima; involving the City of Cape Town Emergency Preparedness department, as well as Eskom, who operate the Koeberg nuclear plant. Also to engage meaningfully with the City authorities to see to what extent the lessons from Fukushima have been incorporated into their emergency plan.
(Note that Eskom declined to attend a week before the conference.)

The morning session began with presentations of first hand experiences at Chernobyl from Anton Vdovichenko (Children of Chernobyl) and Jan Smith (Mexico, Nuclear Photojournalist) who had just flown in from Japan. Next Greg Pillay (manager at the Cape Town Disaster Risk Management Centre) had an opportunity to present the current plan for emergency evacuation, should there be an incident at the Koeberg nuclear plant. The presentations were followed by a panel discussion, chaired by Peter Becker, with questions from the floor.

Anton brought a human voice to the discussions by giving details of his and others’ experiences of life after the Chernobyl disaster. They were not informed by authorities, and continued to collect food such as mushrooms from the forest near their village in Russia, unaware that they were dangerously radioactive. Many people, who were affected by radiation, were discriminated against, lost their jobs, which led to social breakdown. Twenty-five years later this is still affecting new generations.

Jan is a photographer specializing in documenting nuclear landscapes and interviewing survivors of nuclear accidents. Jan’s presentation focused on how we can better prepare ourselves to respond to a nuclear disaster based on the experiences after Fukushima. Some of the main points that came out of his presentation were:

Jan also showed a short interview clip with Hasegawa Kenichi, a dairy farmer from Iitate, Fukushima prefecture. In this short and powerful video Hasegawasan describes how how the farmers had to slaughter their dairy herds due to high levels of radiactive contamination, and how they has lost their farms due to the nuclear disaster.

Greg Pillay
Greg Pillay’s presentation covered the City of Cape Town/Eskom current emergency response plan for the Koeberg nuclear reactor. Mr Pillay reiterated the policy of openness and engagement of the City of Cape Town, and welcomed the opportunity to learn from the international speakers. He also mentioned three points which would be taken from the conference for use in reviewing the current plan:

1. Mobile telephone networks should be set up to be used to inform the public in
case of any radiation danger

2. Pharmacies could be used as distribution points across Cape Town for potassium iodate tablets

3. School curriculum should include education about emergency procedures and protecting against radiation

During question time, in light of the 20km exclusion zone at Fukushima, it was asked what the evacuation plan was for Cape Town for the area beyond the current 16km EPZ (emergency protection zone). Mr Pillay replied that it was not feasible to evacuate Cape Town, so there was no plan in place for such a contingency.

The afternoon session focused on sources of electricity other than nuclear, and their desirability and viability in the South African context. The first speaker was Bishop Geoff Davies, who spoke briefly about the ethical imperative of finding sources of energy less dangerous than nuclear power.

Next Gunther Pauli (left) (entrepreneur and author of The Blue Economy) spoke about the economics of a sustainable society, and that the cheapest resource to use was one that was found locally, namely solar and wind power in South Africa.

Mr Pauli and Bishop Davies both made strong arguments for why old ways of approaching energy planning (centralised, grid based) no longer applied. The state of societies’ present approach to ‘development’ requires a paradigm shift encompassing the human potential for innovation and technological advances; these would provide everything we need to achieve what is needed from renewable sources without continuous degradation to the planet.

Göran Bryntse (Swedish Renewable Energies Association board member) spoke about how economic growth in Sweden has not resulted in any growth in electricity demand, dispelling the myth that GDP and electricity demand are linked. He also described how in Sweden electricity from wind power has exceeded the thresholds that were believed to be limits due to variability and grid stability issues, and the estimates have been upgraded, currently to about 30%. His prediction is that Sweden will reach 100% electricity generation from renewable sources.

Prof. Wikus van Niekerk (Director of the Centre for Renewable and Sustainable Energy at Stellenbosch University) gave an in-depth presentation about the potential for large scale renewable energy in South Africa, particularly solar energy (although he quipped that engineers don’t like solar power plants

because the only moving part is the gate).

Storage is a challenge which needs to be addressed. Political will is a key part of addressing the relatively minor gaps with Renewable energy. He estimated that with current technology renewable energy could address 50% of of electricity needs. Prof. van Niekerk also called for academic rigorousness in the debate about energy, and quickly corrected questioners who were not factually accurate.

Finally, Lance Greyling, shadow minister of energy, spoke about the political and regulatory obstacles to implementing renewable energy projects in South Africa. The presentations were followed by a panel discussion chaired by Yvette Abrahams, and an energetic session of questions from the floor.

The outcomes of the morning session were:

[The presentations by Anton Vdovichenko, Jan Smith and Greg Pillay were videoed, and have been edited and uploaded on the KoebergAlert YouTube channel]  http://www.youtube.com/user/koebergalert?feature=results_main
The outcomes of the afternoon session were:

The objectives of these side events were to inform the public about the history of nuclear power, some of the technical issues, such as nuclear waste management, and the potential results of a nuclear disaster.

Jan Smith has produced a exhibition of photographs from Prypiat, the city close to Chernobyl which was abandoned in 1986. These haunting images bring home in a high impact visual way the possible consequences of a nuclear disaster.

Jan had also been in the Fukushima area early in 2012, and his exhibition of photographs from there was shown for the first time in Cape Town, with the opening being one of the conference side events. The exhibition consisted of 35 images, each with a testimonial given by survivors and evacuees. The exhibition ran from 6th March to 16th March 2012 at a commercial gallery in the city centre; the Erdmann Contemporay Gallery.

Video evening: “Nuclear Medley”
A selection of informative and short videos was made covering crucial events in the history of nuclear power, including the recent events at Fukushima.

Film night: “Into Eternity”
Screening rights for this award winning documentary were purchased, and an agreement entered into with the Labia Theatre/Cinema. The documentary was shown, and followed by a lively questions and answer session with Peter Becker and Göran  Bryntse (previously the chair of the Swedish anti-nuclear movement).

Side event cooperation with other organisations 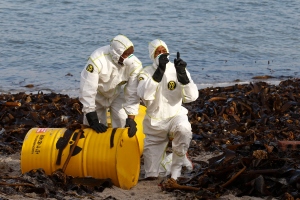 Outcomes of the side events, and conference as a whole

Acknowledgements and thanks
There are many individuals who generously gave time and energy to making the conference possible, and work smoothly. All the individuals are too many to mention, but the following funders were crucial in enabling the conference, and particularly the attendance by the international guests Naturs Kydds Foreningen of Sweden, The Heinrich Boll Foundation, European Network of Networkers for Ecological Reflection and Action, Germany.

Special thanks are also due to all the wonderful people at PeaceBoat, Japan, and to Brenda Martin of Project 90×2030, who offered support and advice throughout the planning, and to Henning Brand who appeared at the right moment to volunteer his time. Thanks also are due to the Koeberg Alert working group, to the Erdmann Contemporary Gallery which made the photography exhibition possible, and the Townhouse Hotel who offered their
conference venue at cost price.