A nuclear incident requiring an evacuation around Koeberg would have a significant effect on the spread of COVID-19. During an evacuation, social distancing will not be followed as people pack into any available transport. Travel restrictions will either be suspended by the government, or overridden by the public possibly with bloodshed. No roadblock can stop 80 000 panicking people!

At the mass shelter sites (mainly for lower income groups), such as the Velodrome, infection rates will be high, where people will have to remain for an extended period. Within weeks the virus is likely to spread throughout each mass shelter site. Those from the mandatory evacuation zone with cars will likely drive to stay with friends or family around the country. There would be extensive fear-driven voluntary evacuation from outside the 16km zone, again with people going to stay elsewhere. Both of these will defeat the travel restrictions aimed at containing the spread. Two hospitals would also have to be evacuated, making about 150 beds unavailable, and beds found for the in-patients in other hospitals.

We are in a public health nightmare already, and it’s worth eliminating any completely unnecessary risks of making it even worse. There is no downside to temporarily shutting down the second reactor at Koeberg until the pandemic peak is over, and it can be started up again in about two days.

The following was sent as a letter to the Presidency, the Minister of Health, the MEC for Health in the Western Cape and the Portfolio Committee on Health on 6 April 2020.

The Evacuation and Relocation plan (CCT KNEP 4.4) for the Koeberg Nuclear Power Station (KNPS) cannot currently be implemented in a way which complies with the lock down regulations nor with social distancing guidelines relating to COVID-19, as well as for other reasons. While unlikely, the consequences of a nuclear incident requiring evacuation during lock down would be very serious.

The power currently generated by  Koeberg is 900MW (one reactor is down until the end of April) and the drop in demand during the lock-down has far exceeded this, and therefore shutting down KNPS will not result in generation shortages. Stabilisation of the national grid does not require KNPS to be operating.

The KNPS reactors should therefore both be kept in a temporarily shut down state as a matter of urgency until such time as the emergency plan has been updated, or the COVID-19 crisis is over.

Section 38. (1)(a) of the NNR Act of 1999 requires an emergency plan for a nuclear power installation. This is fulfilled by The Integrated Koeberg Nuclear Emergency Plan [Eskom reference KAA-811] which in section 4.2.16 refers to the the City of Cape Town Evacuation and Relocation plan [CCT KNEP 4.4].

Transport from within Evacuation Zone

Section 6.2 of this plan begins “The Duty DM Co-ordinator will arrange for the necessary transportation …” 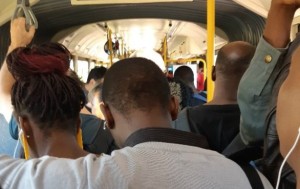 According to the Minutes of a meeting of the Koeberg Public Safety Information Forum on 27 March 2014 this will be done by diverting MyCiti buses for this purpose. [KPSIF Minutes 27 March 2014]

The requirements are that the Precautionary Action Zone must be capable of being evacuated within 4 hours, and the Urgent Protective Action Zone within 16 hours. This was estimated to involve 79 000 people in 2001 and has grown by an unknown amount over the 19 years since.
[Nuclear-1 EIA appendix E18: SOCIAL IMPACT ASSESSMENT August 2015]

There are also two hospitals in this evacuation zone: Wesfleur and Netcare Blaauwberg with about 150 beds.

MyCiti buses are only operating during limited hours which may impact the speed this plan can be implemented. Social distancing requirements prohibit the busses from being full which would mean many more bus trips than previously modelled are required.

Attachment 4 of the plan lists assembly points for each community/area, such as the Bellville Velodrome where hundreds or perhaps thousands of people would be expected to take temporary shelter. There is no need to elaborate why a plan to pack so many people into one venue is a major problem given the current crisis.

In addition, those just outside the formal evacuation zone are likely to be conflicted between fleeing from the vicinity and obeying the lock down regulations, leading to widespread contravention of these regulations and potential conflict at any army road blocks on the highways.

The lock down combined with low economic growth has resulted in a significant drop in electricity demand as a result of businesses and factories being closed down for the lock down. The lower demand is expected to persist even after lock down is ended, as businesses start up again and both SA and global economic activity levels gradually recover. The 900MW currently being contributed by the single reactor operating at Koeberg is significantly less than the 7,500MW – 9,000MW drop in demand reported by Eskom on 2 April 2020 in a press release.

The KPNS can be used to contribute to frequency control stabilisation factor on the national grid, but it is just one of many such assets on the grid. Stabilisation can be provided without Koeberg as had been demonstrated in the past when both Koeberg generators have been shut down in overlapping periods

In general, Koeberg is not necessary for grid stability or for operating safely and within grid code specified limits of the transmission system.

Koeberg technical staff availability will be affected due to COVID19 infections and there is a small cohort of highly specialised technical staff necessary for the safe operation of the plant. The risk of an accident could therefore be increased, and the ability to respond to an unusual event requiring a rapid response is simultaneously decreased. Emergency handling procedures also contain procedures which rely on French high level technical assistance. Given the high number of infections in France, it is also likely there will be reduced availability of these technicians.

Similarly, the Cape Town Disaster Risk Management Centre is already under pressure from handling the National State of Disaster, which will not be resolved in the near future and are also likely to have a reduced staff complement due to sick leave as a result of the inevitable  COVID-19 infections.

The army is expected to assist with any evacuation required. [KPSIF Minues 27 June 2013]

However, the army is currently deployed nationally, is experiencing a high rate of COVID-19 infection internally, and so may have limited resources to rapidly allocate to assistance with any evacuation, as anticipated by the existing emergency plan.

One response to “Koeberg Emergency Plan conflicts with COVID-19 regulations”