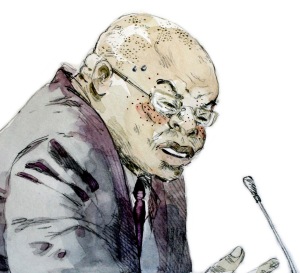 The presentation included a list of sixteen consultancy contracts that have been awarded by the DOE. First prize for the most lucrative contract is a tie between Mahlako-A-Phahla Investments and Central Lake Trading 149, at about R1.7 million per week!

MPs asked an array of questions, including some very hard hitting ones about procurement processes from Gordon Mackay of the DA.  The question that stood out was: why did the DOE pay R171 million for a customised software system to handle the procurement of nuclear, when it will be Eskom, and not the DOE, doing the procurement?  Unfortunately, due to Mackay’s over confrontational and sometimes petty style, ANC members closed ranks and his questions were lost in the sea of his invective, and so largely ignored.  This transaction was first covered by the Mail & Guardian here: Zuma pals clinch first nuclear deal.

Another notable line of questioning was from ANC MP Thandi Mahambehlala.  Due to her history, such as being on the discredited Nkandla ad hoc committee, it was perhaps no surprise the line this wanderer took. A long, rambling, time wasting preamble eventually led to a ‘sweetheart question’ to Mbambo, to the effect of: wouldn’t it be better to have these meetings in secret in order to protect commercially sensitive information?  It was also no surprise that Mbambo ignored the hard questions from Mackay, and spent a tediously long time agreeing with Mahambehlala.  In the light of the fact that the ANC had attempted to make this meeting closed to the press and the public, it was clear that this was a prearranged rear-guard action to attempt to justify future meetings being held in secret. A sad side of this is that Mahambehlala used to ask hard questions to hold officials accountable, but advancement in her financial status seems to have gone hand in hand with a retreat from an interest in good governance.

It was also saddening to see that the MPs on the committee  for the EFF and Agang did not bother to turn up, nor even to send apologies.

A jarring presence at the inner table was Kelvin Kemm, who repeatedly raised his hand to attempt to speak to the committee.  Kemm runs a nuclear consultancy company as well as being the chair of the Nuclear Energy Corporation of South Africa (NECSA) board, and so not surprisingly, when the committee chair, Fikile Majola, eventually allowed him to speak, Kemm waxed lyrical about the wonders of nuclear power and how it should go ahead as soon as possible.  Kemm of course stands to gain from future consultancy work should his advice be followed.  Another disturbing link is that the executive director of Mahlako-A-Phahla (which recently received over R20 million from the DOE) is Meta Maponya, who has served on the board of NTP, a wholly owned commercial subsidiary of NECSA.

On a lighter note, Yvonne Chetty was called on to answer some of the questions Mbambo had evaded around procurement processes for the above consultancy work.  Chetty followed her boss’s lead, and also ignored most of them, in particular the question as to why the R171 million tender was piggybacked onto a Freestate provincial tender.  Instead, she gave a comically brief response consisting of a bland assurance that procedure was followed in all cases. Chetty’s previous job as senior finance manager at PRASA does not inspire confidence in these assurances. PRASA was investigated by the Public Protector, who found that there was a “culture of systemic failure to comply with the supply chain management policy”.  PRASA is currently under investigation for suspect deals totalling over R14bn.  According to her CV, Chetty was responsible for all PRASA supply chain services for the Gauteng region.  Chetty’s reassurances that the procurement was done correctly are therefore entirely unconvincing.

Predictably, the meeting ran out of time, and the chair closed with many questions still unanswered. There was one ray of hope: in closing, Majola referred to the contradictory views that have been expressed with regards to technical aspects of nuclear power, such as the cost.  To address this, he suggested having a debate before the portfolio committee, where all the diverging views can be put forward, including by NGOs opposed to nuclear power.

There are two dark clouds around this ray of hope. The first is: should such a debate not have happened before R200 million was spent?  The second cloud is that Mojola has apparently made this offer of an open debate many times over the past few years.  The question is therefore: will you deliver on your promise this time, Mr Mojola?

The presentation given by Mbambo: Report-of-the-nbr-procurement-of-16-service-providers

One response to “Would you like to earn R1.7m a week?”