The nuclear power industry is deeply troubled, with little cause for optimism. There is growing worldwide public resistance to nuclear power stations, President Obama has terminated government subsidies in the USA for nuclear power, and Germany and Switzerland have committed to shutting down all their reactors. While the renewable energy industry has seen dramatic growth and constantly falling costs, the nuclear industry grapples with spiralling costs, the seemingly intractable waste disposal issue, and the ongoing huge economic and human costs of the Fukushima nuclear disaster.

We have heard from the nuclear lobby that a ‘nuclear renaissance’ is just around the corner, and as evidence for this, we are told there are 65 nuclear reactors currently ‘under construction’ worldwide. Examination of this list, however, reveals some interesting details. The International Atomic Energy Association (IAEA), which promotes nuclear energy, maintains a database of all commercial reactors, called the Power Reactor Information System (PRIS). As at March 2012, it listed 65 reactors as ‘under construction’. 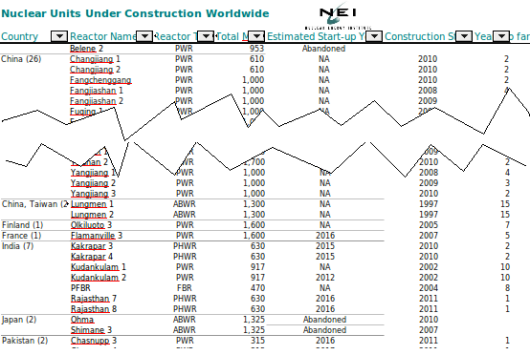 Some of the reactors listed by the IAEA as ‘under construction’

It is instructive to look at the number of years some of these have been ‘under construction’, for example, Lungmen 1 and 2 in China were begun in 1997, and have so far taken 15 years to build. In the Slovak Republic, construction of Mochovce 3 and 4 was started in 1987, making 25 years so far. For Atucha 2 in Argentina, its 31 years. Moving from the disappointing to the ludicrous, Watts Bar 2 in the USA has been ‘under construction’ since 1972 i.e. for 40 years. It is likely that these long delayed projects will eventually be cancelled, and almost certain they will never be an economic success. Even if they are ever completed, the designs will be frighteningly outdated, and their safety features are unlikely to satisfy current regulatory requirements or public concerns. It is therefore disingenuous to include these in a list of ‘success stories’ about nuclear power. Eliminating the reactors which have been ‘under construction’ for 15 years or more, reduces the list of 65 to 52.

Another item in the PRIS data is the estimated start up year, i.e. the projected completion date. It is interesting that for many of these reactors across South Korea, India, France, Brazil and China, the PRIS database does not list an estimated start up year. It is unusual, to say the least, for a construction project to have no estimated completion date. This can be interpreted as either a lack of commitment to the project, or a sign that problems have arisen which will delay the construction by an unknown amount of time. These can hardly be considered success stories, and eliminating them from the list of 52 reactors leaves just 10 reactors which are under construction and have an estimated completion date. This paints a very different picture to the 65 we started with above.

Of these 10 remaining reactors, most are in pairs, and they are spread over 6 different nuclear plants. And of these plants, only 2 (Vogtle in the USA and Flamville in France) are in the West. What is more, Vogtle is likely to be the last nuclear plant built in the USA, and was only viable because of subsidies provided by the Bush administration.

An analysis of these 45 countries reveals some interesting examples. It includes Nambia and Mongolia, which currently both consume about 3 000 GWh per year. A small nuclear power station such as Koeberg, if operated at 80% capacity would produce over 12 000 GWh per year. Is it likely that any country will pay for generating capacity which will produce more than four times the electricity they need? Including these countries in the ‘considering’ list indicates a wilful distortion of the facts by the World Nuclear Association, perhaps born of a desperation to conceal the decline of their industry.

Number of constructions started per year as per the IAEA PRIS database, July 2012

Nuclear power plants are very long term commitments. It is therefore important to have a healthy global nuclear industry in place, so that services such as maintenance, spare parts, decontamination after a leak, plant decommissioning and waste handling are available at reasonable prices when they are required, decades from now.

The sad truth is that even according to the optimistic IAEA data from the PRIS data the number of reactors on which construction was started fell 75% from 2010 to 2011, and again 75% from 2011 to 2012. Far from a renaissance, this is a catastrophic collapse. South Africa would do well to wait a few years to see if this trend reverses before locking itself into the nuclear energy option.