This evening SAFCEI (the Southern African Faith Communities’ Environment Institute) called for a candlelight vigil outside the main entrance to COP17 at 7pm.

It started with a group of five activists lighting candles just inside the exhibition centre in Durban.  Despite it being windy and rain, and the first problem is that none of us were smokers, so we struggled to find a light.  Eventually some passers by were 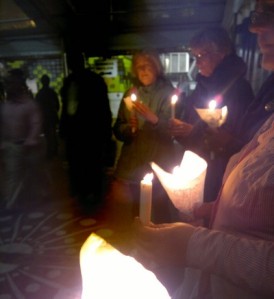 persuaded to give up their lighter, and with difficulty we lit our candles and tried to shelter them from the gusting wind.  We walked slowly to the exit tunnel, where it was sheltered from the rain and some of the wind.

After about 10 minutes we were joined by a few others from SAFCEI, and we all stood there a bit uneasily, trying not to look at the police who were present.

Some of us held two candles, and tried to offer them to the delegates and others who were leaving the centre.  Someone approached me and asked what we were doing, and I explained we were trying to keep a little light of hope alive.  She took a candle and stood with us.  Other started to join, and when a group of youngsters came past, and joined us en masse, the group suddenly grew significantly.

Singing broke out, and we ran out of candles.  There were about 40 or 50 people, and we ended up filling the exit tunnel.  It was so interesting to watch the reactions fro delegates as they threaded their way out.  Some smiled, and said a few words of encouragement or appreciation. Others fixed their eyes on the ground or the distance, and walked grimly past.  We had planned to stay there about 20 minutes, but it went on for about 45 minutes.  Eventually the venue security asked us to clear a path through the exit, and we moved outside.