In June representatives of Eartlife Africa Jhb and Greenpeace visited Cape Town and the Hermanus area.  Several meetings with other organisations were arranged, including one in Woodstock with Right To Know activists.  Plans for a national ‘nuclear school’ where discussed, but funding would be required. This would be unlikely to happen before October and  since the next draft of the Nuclear-1 Environmental Impact Report was due to be released around October, it was agreed that workshops should be arranged before that if possible.  To maximise impact, the workshops would be in ‘train the trainers’ format, to capacitate activist leaders to speak authoritatively on the nuclear issue.

We chose the 28th of July, and so it was my task to organise the logistics of the workshop, and Peter Becker’s to sort out the content. I had never done anything like this before, but it was a learning experience both in logistic skills and the content of the workshop itself.

We planned for ten individuals to attend the workshop, and asked other organisations to suggest activist leaders who would be able to take what they learnt back to their communities. Eleven people participated, with some additional visits by some fellow activists.

The day began with introductions, distribution of materials, and a muffin! Each session was approximately forty minutes, which included feedback and role-play to allow the participants to practice expressing what was covered in each session. 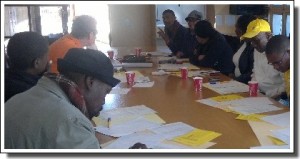 The first session covered electricity prices, how they are rising dramatically, how much we pay and who electricity is used by. I learned some surprising statistics such as the average cost for producing electricity is 33c/kWhr (what Eskom pays), and we the citizens pay around 100c/kWh (at present) and (some) big businesses pay 12c/kWh.

The second session examined the reasons for price increases, outlined the roles of Eskom and NERSA (the National Energy Regulator of South Africa).

This made it clear that complaints about the price of electricity should be taken to NERSA, and not Eskom.  The upcoming public participation process in the NERSA hearings was highlighted as an opportunity for communities to make their voices heard.

According to Eskom’s previous submission to NERSA, there are two reasons for the price increases.  Firstly to cover operational costs such as the purchase of coal, and secondly to cover the cost of building new generation capacity.  Eskom needs to show it is profitable before it will be able to get the loans it needs to build new power plants.

Section three covered the costs of the proposed nuclear build, approximately R300 billion, not including the likely overruns. It would be the biggest  amount the South African government ever spends on infrastructure, and yet was not mentioned in the budget speech by the minister of finance. We compared the R300 billion to other national budgets, and then it was shown how R1 trillion (R300 billion plus approximate overrun costs) of public spending could build 10 million houses and provide free housing to everyone in the country.

The fourth section was about relevant laws and regulations. In particular, a significant alteration in the ‘New Capacity & Planning Regulations’ from August 2009 to May 2011 was highlighted. In 2009 it stated that it was a must for Eskom to do feasibility studies, including an affordability study. In 2011 it was changed to exclude nuclear power technology, and to make the feasibility study optional, at the discretion of the Minister.

After a delicious and much appreciated lunch by Sense of Taste, participants shared their experiences of holding public meetings.

Activists at the workshop

We did a final role play question and answer session to build confidence. This highlighted the areas where the participants were confident, and also some areas where further work would be useful, such as recalling the relevant figures accurately.

At the end of the workshop a few reflective questions were asked. When asked the question ‘What was the most interesting part of the workshop?’,the most common answers were the reasons for price hikes, the usage of electricty, and the cost of nuclear power.

For the question ‘What did you most enjoy?’ (besides lunch!) one of the responses was having the details of the Regulations and the roles of NERSA explained. This information can be taken to their communities and used to raise awareness and prepare them for the NERSA public hearings.

‘What would make the workshop better?’ Some responses were the need for more time to engage with each other, share experiences and knowledge of holding public meetings/workshops, and that participants stick to the subject at hand, to save time and maintain focus.

There was great interest shown by the activists and appreciation at receiving this relevant information that can be shared in a positive way at a grassroots level. I felt the workshop was a great success, Peter does well as a facilitator, encouraging participation and engagement and attempting to keep the workshop on the topic.

Over the next month the activists will attempt to take these topics to their own communities at meetings or workshops.  The next we meet them will be to share feedback on this process which will be held on the 18th August 2012.

In the days since the workshop, we have already been asked to observe a workshop in the Harare Library in Khayelitsha by one of the participants of Saturday’s workshop, which is exciting! This will be taking place on Friday, 3 August, at 2pm-4pm, everyone is welcome to join and show support.

2 responses to “Electricity and nuclear costs workshop in Khayelitsha”